RavenDB - Changing the Lo on the HiLo Generator

Well I'm currently learning RavenDB, it's awesome! But I noticed when I put data in, all the Id's generated every time I ran up my application to test were:

This would be fine after the app is deployed since I wouldn't be restarting it over and over and over, but during development I personally find it annoying that the numbers jump so high.

Fortunately I figured out a way. (which about an hour later I found on Google Groups, granted I had to use a different keyword to find it)

Basically you just need to create a new instance of the MultiTypeHiLoKeyGenerator class, passing in the arguments and assigning it to the document store:

So running up my app once: 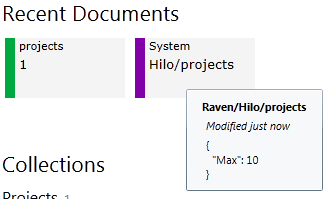 Now the identity only increases every time the app restarts. And to show it generates more than 1 number...

It took a while of hunting on the net, but it turns out Googling & Binging, or searching (StackOverflow/Google Groups) for the keyword Lo doesn't work, the argument is capacity and searching for that on Google Groups lead me here:

Hopefully someone else finds this useful :)